From Friday the 13th: The Game Wiki
Jump to: navigation, search 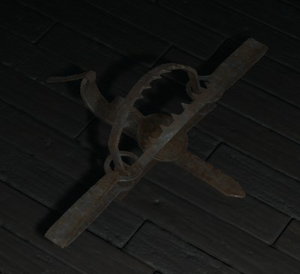 Bear Traps are a type of weapon in Friday the 13th: The Game.

Bears Traps can found by counselors, albeit they are rare to find, and appear as classic-looking bear traps with teeth-like edges. First, counselors can pick them up, and then place them in an area of their choosing. Afterward, another button prompt can be pressed in order to prepare the trap so it will snap on any unsuspecting being who attempts to cross it. As such, it's a useful tool for counselors to fortify an area, but it requires strategic planning on the player's end. One common strategy for counselors is to place it near the entrance of a door; this way, Jason will step on it after breaking through a door if he isn't careful. Otherwise, plant them around the bends of hallways so Jason won't see them easily. If you're feeling lucky, you can even plant them in areas you suspect Jason will visit at one point (such as near the fuse box), although this isn't a suggested usage for it.

Beware the fact other counselors can injure themselves if they step on your prepared bear trap; it's even possible to kill someone accidentally. It's best to not keep random bear traps out in the open if you're not around to help avoid this fate. This way, another counselor can prepare the bear trap for their own purposes. As of Patch 1.09 players no longer suffer an XP penalty for killing someone with a bear trap, but you should be careful about placing them nonetheless.

Keep in mind Jason can use his Shift ability in order to avoid stepping on a bear trap. This means experienced Jason's will be careful to not barge through a room immediately before checking the ground, making it difficult to ensnare him. Improvising the situation will be key to dealing with these players. For instance, if there is a hallway with a locked door; an entrance to a room; and a window, you can place the trap in front of the entrance to the room, then open the window. When Jason shows up, he will see the locked door, then notice the opened window alongside another room entrance with a bear trap in front of it. As a result, Jason will need to take a chance in order to figure out where exactly his prey decided to go: either in the room the bear trap is blocking off, or outside the window while using the bear trap as a diversion. These kinds of strategies can buy you time, or even completely fool Jason as to your exact location.

Think of bear traps as a way to goad Jason into using his abilities. If he uses Shift to bypass a bear trap, only to discover no one is there, he can still use Morph to go to another area he thinks you escaped to. However, by forcing him to use Shift earlier, he's down an ability to help him capture you even if he does find you once more. The more times you can force Jason to use his abilities without capturing you, the more time you can buy yourself in order to escape his clutches as well as hide once more.

One final suggestion is to be careful if you decide to hide in a room with no windows with only one entrance/exit. If you use the bear trap to blockade the entryway, Jason can bypass it using his Shift ability, which means you'll have to fight Jason since you won't have time to safely disarm the trap before he attacks/grabs you.

Originally, as a hidden bonus, counselors with at least six points in the luck stat would take less damage when stepping on a bear trap. However, due to patch 10/11/2017, this is no longer true.

The AI in Offline Mode do not use traps, even on Hard difficulty.

Jason starts off a game with a limited number of homemade Traps which cannot be replenished during the game. Unlike the Bear Traps that Counselors can find, these Bear Traps appear to be made using wood, rusty nails, a mattress spring, and a plate. However, unlike Counselor Traps, Jason will disguise his by burying them under leaves, making it difficult for Counselors to see them in the dark. These tools are a great help when locking down an objective, such as placing Traps in front of the fuse box in order to prevent Counselors from calling the police. He can also place them in front of windows when assaulting a building Counselors are hiding in; this way, a Counselor who attempts to escape through a window will be trapped long enough for Jason to grab/attack them. Make sure, however, the Counselor doesn't have another means to escape a building, otherwise you might end up wasting a considerable number of Traps.

When Jason plants a Trap, they show up on his large/mini maps as red icons. If a Counselor activates one of these Traps, it will generate a noise cue for Jason, and the Trap in question will glow on the map. This makes it easy for Jason to hunt down whoever is near the trap, so long as he isn't distracted at the time. Keep in mind that Counselors are able to sacrifice a Pocket Knife in order to disable a Trap (they must be crouching when doing so). Furthermore, if a group of Counselors are traveling together, they might have someone step on the Trap to disarm it, knowing they will have strength in numbers if Jason decides to show up (which might even be the point if the group is trying to obtain Jason's mask).

Jason can only plant them outside, unlike Counselor Bear Traps. He also cannot plant them on the wooden dock boards near the Boat objective. Finally, he will not spring his own Traps upon stepping on them, unlike Counselors. Finally, as of patch 10/25/2017, Jason cannot plant traps in close proximity to each other, forcing him to take care when trapping an objective.

The AI in Offline Mode will avoid going near Jason's Traps even if they have a Pocket Knife, as they are not known to disable them. However, there is a chance that they will attempt a repair or escape despite a Trap being in their way.