The following is a list of Characters featured in Friday the 13th: The Game.

In the game, players can take control of a number of different characters. Players will either have a chance at being a counselor or Jason in Quick Play. Players can pick a preference of either Jason, Counselor, or None. 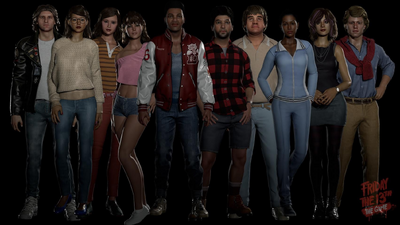 The game currently includes fourteen counselors, plus Tommy Jarvis, all with different strengths and weaknesses. Only five counselors are available to play at the start, with others being unlocked as a player rises up in Player Level.

Although Tommy isn't technically considered a counselor, he can be summoned in the game. All of Tommy's stats are maxed, and he's the only one who can kill Jason if certain criteria are met. Refer to his page for steps on bringing him into the game as well as other special information.

Rob Dier ("The First Victim") also makes an appearance in the game's intro, but he dies immediately. He's currently an unplayable counselor.

The character Victoria Sterling, who is unlocked later in the game, is based on the character Melissa (exact outfit and hair) from Friday the 13th Part 7.

At the initial release of the game there where six different playable Jason's to choose from, all based on the film series itself. These being Parts 2, 3, 6, 7, 8, and 9. There was also a Tom-Savini-Jason variant created exclusively for backers of the Kickstarter Campaign, later they added a Jason variant based off of the color scheme from the 1989 Nintendo Entertainment System video game of the same name. On Oct 13th 2017, they released Jason Part 4 as a playable Jason and later released Part 5 (Roy Burns) on Jan 26th, 2018.